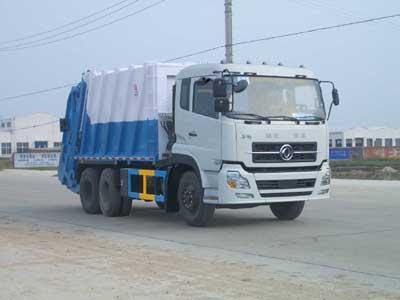 As you may have noticed, we have sitemeter on our page, which tells us how people find this blog. Most hits come from predictable places: through other Fragile X blogs, through our facebook pages, or from the Blogger navigation bar (which takes people to a random recently updated blog).

However, it is really fun to see how people find this blog when searching. Someone typed "survival garbage trucks" into Google, and lo and behold, the first listing is this entry. I guess this is our claim to fame.
Posted by ST at 10:07 PM No comments:

Email ThisBlogThis!Share to TwitterShare to FacebookShare to Pinterest
Labels: community, just for fun

I'm not sure I agree with the current push to remove the phrase "mental retardation" from the national vocabulary. Yes, it's come to have negative connotations, but any phrase that means the same thing will get those negative associations, too. "Mentally retarded" is already the result of this process: it's a euphemism for "imbecile", "moron", or "idiot". We need some phrase we can use to describe the phenomenon. When my son is doing something unacceptable in public, and I say, "Pardon me, he's a special needs kid," people don't know what the hell I'm talking about. I suspect "intellectual disability" would lead to the same "huh?" reaction. But when I say, "I'm sorry, he's mentally retarded," it hits with the proper impact. People get it, or at least get something close enough that they know they should apply a different standard of behavior.

I do not like it when people use "retarded" as a generic insult or as a substitute for "fucked up", and will often gently point this out when I hear it. I feel the same way when kids use "gay" as an insult: it doesn't really do any good to come up with a new word for "gay" that isn't used as an insult. What we have to do is show people that it's not wrong to be gay, and that it's hurtful and destructive to use the term as if it is. Similarly, it is not wrong to be mentally retarded, and to use "retard" as an insult is cruel.

If people started using "cancerous" as a pejorative, the solution would not be to rename cancer "abnormal cell replication" in all federal statutes. It would be to socially penalize people who were insensitive enough to turn it into a term of abuse. I guess I feel that way about "mental retardation". It doesn't seem to me that the term is "only used to demean and insult people" as the ARC posting I link to states. But maybe this is a bigger problem outside my own social circle.
Posted by Zachary Drake at 2:16 PM 6 comments:

Comparisons are just getting weirder and harder all the time

Of course I know I "shouldn't" compare Quinn to other kids. Of course. He's his own little person with his own special gifts (like his adorable laugh and contagious joie de vivre). But frankly, it's just getting weirder and harder all the time, and I fear the comparisons will only become more stark and obvious as time goes by. Intellectually, I understand why this is. The gap between Quinn's and typically developing kids' abilities will widen because his rate of development, like most boys with Fragile X, is about half that of (give or take) other kids.

Today we tried a new play cafe. It was fun, and a special treat for Quinn and I since I'm usually working when all the cool play cafes are open. Quinn loved the ball pit, different fireman hats, and puppet theater (for playing peekaboo with the curtains).

It's just shocking, though, to see kids literally half Quinn's size and age, talking, running, jumping, going up and down stairs with ease, and engaging in what looks like very sophisticated pretend play, all of which are things Quinn cannot do yet. I know he will be able to do these things eventually, but there will be a point where other kids will start doing things that Quinn will never do.

It's also socially awkward because people seem to do a double take as my relatively big kid needs help with so many things, doesn't talk, and plays peekaboo with mom for a looooong time while other kids run off to play house in the pretend kitchen.

I also felt a bit jealous of other parents, sitting calmly drinking coffee for at least 75% of the time, while I'd say my sit-to-redirect ratio was more like 25% sitting, 75% redirecting. Most of the other kids didn't need to be told 5,000 times (in one hour) that the toys are "not for your mouth" or that you cannot just sit on other kids or touch their faces (Quinn seems oblivious to these social norms that other, much younger children, seem to get). Other kids didn't fall twice, bite their parents, or pull their parents' hair. I kind of get it why we are so tired and stressed.

And this was not at all a bad time for Quinn and me. This was just a normal time. Not a stellar, Quinn-as-superstar time, but not a bad time, which is much worse than what I've described above. This morning was what most activities with my little guy are like.

I can't imagine what it would be like to be out, sitting at a table drinking coffee, for at least 20 minutes while my kid played without incident. My favorite "other parent" example involved another mom, relaxing at her table, when her two-year-old (I know her age 'cause the mom told me) brought her a pretend pizza to eat and said "Pizza, Mommy." The mom said, "Thank you! I love pizza! Can you bring me some parmesan cheese to put on it?" The little girl ran off, happily, and was gone for another 10 minutes. Wow. So many things going on there that are way beyond Quinn's abilities. If this happened to me, I'd probably jump for joy and order a round of cappuccino and chocolate milk for everyone. 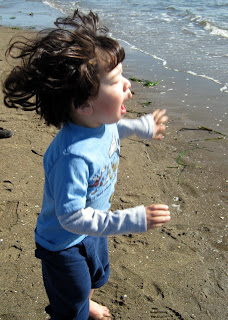 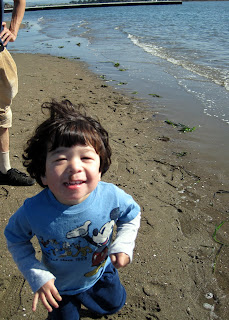 As promised, here's the first of many pics we can start posting now that we've figured out how to get the pics from the new camera onto the computer. Despite our many miserable ongoing contractor woes (we just fired our general contractor, so it's pretty bad and we still don't have a furnace), we are delighted to be living in our new town. Quinn loves it too, and among his many favorite places here is the beach. 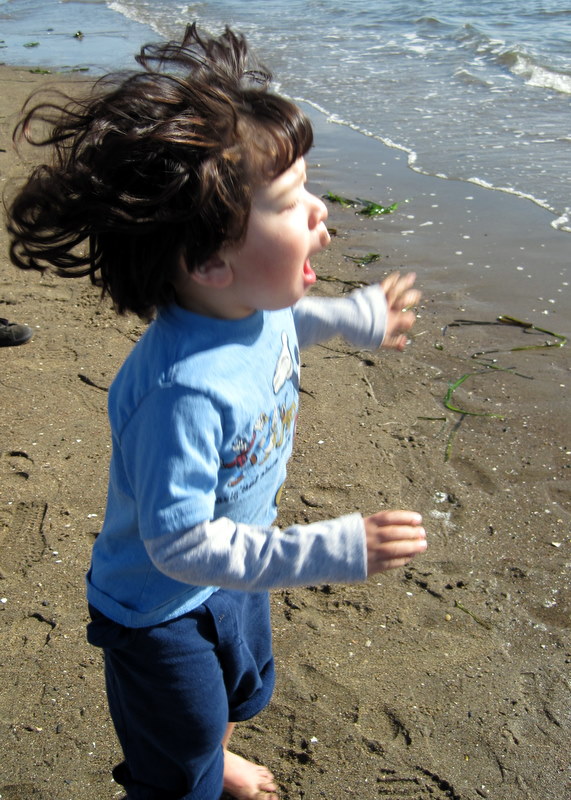